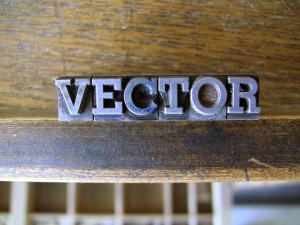 What in the world is a Vector Graphic?

Word of the Week

If you've been in media industry long enough, whether it be Graphic Design, Page Layout, Prepress, publishing, Social Media Management, Content Marketing or anything else, you may have hear a design agency or print provider ask for something called a Vector Graphic. So what in the heck is a vector graphic anyway, and why should you care?

In mathematical terms, a vector represents a geometric entity with both direction and magnitude in addition to a definite inner product. If that doesn't make sense, don't worry about it, because this is not the way we define vector in the Printing and Visual Communications industries.

When we refer to graphics as Vectors, we are really talking about Vector Graphics. A Vector Graphic is defined as a geometrical primitive such as a point, line, curve, shape or polygon that is based on a mathematical expression. In layman terms, it's an infinitely scalable computer graphic, and it's this scalable property that makes them so popular for use with logos and other basic shapes.

Most of the Vector Graphics we see in use today were based upon Adobe's Postscript, which is why Adobe is the leading force in the creation, display and printing of  Vector Graphics. Here's some examples of programs that use & display Vectors:

Vectors are also used in the display of most fonts & typefaces, which is why you can usually zoom in on a PDF file more than 1000% and the type will still look sharp and crisp.

So if Vectors are infinitely scalable and never lose quality, why don't we use them for everything? The truth is that as great as vectors are at describing simple shapes and colors, they're terrible at describing complex graphics such as photographs. This is where Bitmap images come in. An example of a bitmap would be a a JPEG, BMP, Photoshop, RAW, TIFF or PNG file. One more example: both of the images used in this blog post are bitmap images, but the words you are reading at this very moment are vectors.

Have some fun with it — press Ctrl and + (⌘ and + on a Mac) as many times as you can, then look at how sharp the text still is. Then look at the images, and notice how they are starting to pixelate. Don't forget to press Ctrl and 0 when you're done. ;-)