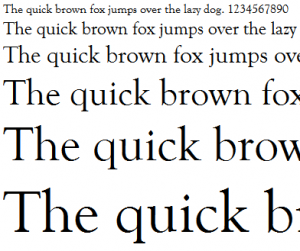 One typeface that has greatly inspired my love for typography over the years is Goudy Old Style. Elegant and stately, Goudy Old Style is a fine choice for any creative that that requires an ambiance of beauty and nobility.

Goudy Old Style was created by Frederic W. Goudy in 1915 on behalf of the American Type Founders, a business trust created in 1892 by the merger of 23 type foundries, representing about 85% of all type manufactured in the United States.

Suitable for both large bodies of text and display, Goudy Old Style is one of the most popular typefaces ever produced. It's characterized by it's diamond-shaped dots on the i, j and punctuation marks, the upturned ear on the g, the somewhat stunted tail of the y, the upward slant of the base of the uppercase E and L, and the uppercase Q's calligraphic tail, which is centered beneath the character. The typeface exudes a strong sense of class, affluence and antiquity.

When to use Goudy Olde Style 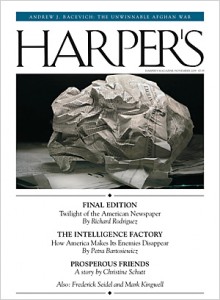 Goudy Old Style is considered by many to be one of the most legible and readable typefaces ever produced, if used on printed media. This coupled with it's elegant forms make it a fine choice for novels, high-end magazines, event posters, programs, business cards, stationary and any creative with an emphasis on beauty and sophistication. One such example is Harper's Magazine, which has used Goudy Old Style throughout the much of the magazine's more recent history.

When not to use Goudy

Goudy Old Style's slight forms and subtle embellishments make it a somewhat poor choice for screen display, particularly in smaller point sizes. It's legibility degrades considerably in this medium and should not therefor be used in large bodies of small type online. Furthermore, Goudy Old Style's grace and elegance can become a hindrance in creatives that call for fun and lightheartedness. It's classic feel can also cause a design to feel overly conservative or antiquated.

Just remember to use your best judgement when deciding whether or not Goudy Old Style is appropriate for your design’s message and audience.